How PBX Spawned BoothCon and A Global Movement 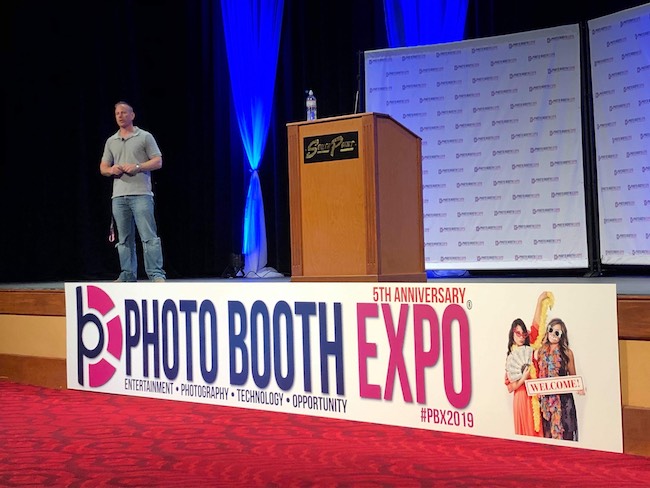 By Justin Jowett
Looking back over the last 10 years of my time in this industry, I think being able to facilitate BoothCon an event where Australian boothers can share their experiences and give back to empower the current generation of boothers to raise the bar on the industry is one of the most rewarding things I have been involved in. Standing in front of hundreds of international boothers at PBX in Las Vegas is a place I’d never imagined I’d find myself. So how did this all happen?

Way back in 2007 I got an invite to my two best friends upcoming combined 30th birthday party in Sydney Australia. One of my friends told me he had just bought a “photo booth” from the USA which he planned to have at the party. I’ll never forget this particular enclosed all steel photo booth as it was brown and not some fancy shade of brown but the proverbial “poo brown”! Despite this it was, of course, a massive hit!
Over the next few years my friend quickly scaled up to a fleet of booths and dominated the Sydney market, making 6 figures and leaving his engineering job to focus on this new venture. Seeing an opportunity for us both in 2009 I came on board as a franchisee in Brisbane (1000km /620 miles away) and for the next 5 years (albeit with black booths!) my new business was successful but had its fair share of struggles through what was to be the biggest growth period for our industry in terms of local competitors and also new styles of photo booths to compete with.
In 2014 with the advent of comparison websites I saw an opportunity for our burgeoning industry and I decided to get out of competing and start helping. Whilst I had been part of a franchise I had a lot of my marketing needs taken care of by head office but I quickly realised most of the boothers out there were doing it alone and struggling with their marketing. So I created a free to list directory to help operators get found cost effectively called Photobooth Finder. To bring additional value to our hundreds of members, many of who were brand new to the industry, I began creating resources by way of blog articles where I shared my tips and tricks on every aspect of running a booth biz. These free to access resources received a lot of great feedback from members with many wanting more help than I could give as I certainly didn’t know everything!
Around 2015 I found my way into the photo booth industry Facebook groups and got to know Steve Bliesner from what was then a relatively new rental business called The Photo Booth Guys. Living just a few suburbs away in Brisbane we caught up a few times and he told me about this Photo Booth Expo he had been to earlier that year called PBX. From talking to Steve and others who had also been there I learnt a lot about the event and the amazing educational and networking benefits it offered attendees.
Meanwhile in the Aussie Photo Booth groups on Facebook it was clear that local boothers were really excited by PBX but with a 12+ hour flight and a terrible currency exchange rate it really wasn’t accessible or affordable for most. Once again I saw an opportunity for the Australian market and with the seed now planted I set about creating something for Aussie boothers. In early 2016 with the input of many local and international colleagues including Rob Savickis, PBX’s show producer, I was ready to go ahead and announce that BoothCon, Australia’s answer to PBX, would be happening in January 2017.
A few months later PBPI, a small educationally focused event in Texas, was announced and around the same time Brandon Wong unveiled his PBSCO community event Booth Summit, The Photo Booth Show was announced for the UK and also Chris Meyer’s first Booth Camp. Whilst PBPI is no longer with us, we have more new additions like the Cabine Photo Show in Brasil. 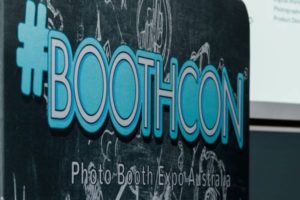 The international community is so blessed to have so much choice and none of this could have been possible if it wasn’t for PBX leading the way to inspire myself and a bunch of other industry leaders and helping to spawn a global movement of events where willing boothers can come and learn, network, play and shop.
The 4th annual BoothCon next takes place in Brisbane Australia 14/15 January 2020 and it’s already shaping up to be the biggest and best BoothCon so I’d love to see you Down Under!